How the Moon Got Its Concentric Rings 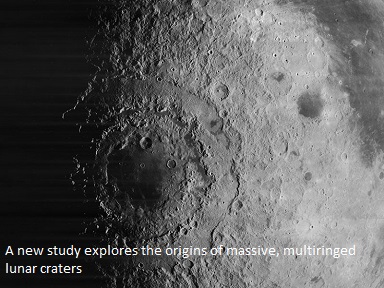 The Moon is pockmarked with impact craters from collisions with meteorites and asteroids, some as big as 1,000 kilometers in diameter. These massive impact craters contain three or more concentric rings, a mysterious feature that has long intrigued scientists interested in how Earth’s early surface and those of other planets evolved. Now a new study, in which scientists simulated an asteroid bigger than New York City slamming into a Moon-like object, explores how such rings form. Billions of years ago, Earth looked a lot like the Moon: riddled with craters from impacts with asteroids and other space debris. Many of these craters have been erased or eroded by the atmosphere and the water flowing over Earth’s surface, so scientists must look to the atmosphereless Moon to reconstruct how different crater features are created.

Researchers already know a lot about how relatively small, simple impact craters form. When a projectile hits its target, it transfers its kinetic energy to the planet or moon, creating powerful shock waves that ripple through the rock. The projectile simultaneously melts and vaporizes, launching molten and solid rock called ejecta hundreds of kilometers away. Then, the remaining ejecta rings the crater site and slumps inward, forming a smooth bowl. On the Moon, this process seems to hold for craters smaller than 20 kilometers in diameter. As impact craters get bigger, however, they grow more complex, eventually forming multiple concentric rings. For example, one of the Moon’s most famous impact craters—the nearly 1,000-kilometer-wide basin Orientale—has three distinctive, bull’s-eye-like rings that have long confounded scientists.