Man of Success Vs Man of Values 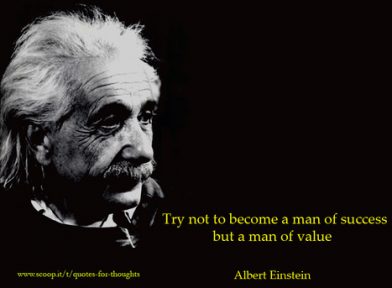 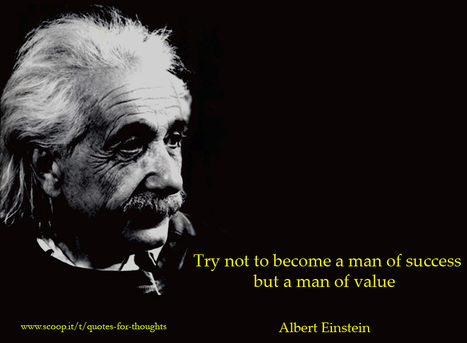 More often than not a man’s character is measured with the amount of success he has. This idea is flawed in itself because success is something that is a result of many factors and is often accidental. None of the successful people, and anyone for that matter, are sure of being a success.

Rather it must be opposite – A man’s success must be measured from the values he possess. Because it’s the values that define how we perceive the world around us and how we chose to react or not to react to situations that comes before us.

Success and value is related to each other in the same way as event and causality. Success may seem very tangible quantity but it’s the end and not the path, if we go according to the present definition of success. Success is the goal or achievement that is associated with an individual or a group but the values define the path that is taken to reach there. As there can be many ways to achieve the same goal, values define the quality of a person vis-à-vis others.

For example – Everyone in the freedom struggle movements of India had one goal and see their success in freedom from the tyranny of British Raj. But it’s the value of Mahatma Gandhi, Subhash C Bose, Bhagat Singh and others that distinguished them from each other. Gandhij’s values of Truth and Non-violence sets him apart from everyone and gave him the status of Father of Nation.

This example brings up a very important point that world and people take inspiration from values and not Success. Success might be remembered, celebrated or highlighted but it’s the values that are cherished, followed, adopted and passed on. Swami Vivekananda left his body at very young age but it’s the path that he followed which has made him great and his messages are followed. His ideals of service to others, his values of untiring work and commitment towards the goal gives him the status that he has today.

Success is temporary, values are permanent:

Success fades away with time and gets replaced by other success or achievement. And the process continues but the values that are inculcated within the individual stays for life. Success and Failure are two probable mutually exhaustive event and in simple arithmetic terms each has the 0.5 probability of occurring. But values always has the probability of 1 i.e. value is not a game of probability as to what will be the value is independent of external factors. It is 100% dependent on the individual and the way he has been brought up to face this world.

Sachin Tendulkar, Bharat Ratna winning sportsman, is the most celebrated figure of the cricket world, so much so that he is referred to as the God of cricket. But he is at that position not because he has 100 hundreds, or maximum runs, he is there because of the values that he has shown on and off the field. He maintained a certain level of ethics and held playing and winning world cup for the country as his biggest achievements over and above his personal milestones. This can even be seen now as most of player retirement take a backseat but Sachin is active in politics, taken up the task of Swachcha Bharat mission and uplifting the level of sports in the country. Values therefore define the type of person you are.

Values shapes success and the fate of success:

Success can come to any person but values gives meaning to success. Values of an individual defines how he will handle success. Values gives us shape like a potter shapes his vessel. Success will slip away if we are a leaky vessel and are unable to handle it and get consumed by it. Values is something that driven Oliver and Wilber Right to make a flying device; they had no resource, no tech. support, and no capital. But they had values like courage, they were driven by a cause, with an idea that can change the way humans commuted. In fact, the world got to know about their success two days after they took flight. What is to be understood from this example is that it was very much possible that Wright brothers could have been lost in the history if they never had success but this is not what they were looking for; they were happy with the path they were following and their values shaped their success. Success is an event but values are the process that help one arrive at success.

The idea of success:

Therefore it is required that world should not measure someone’s character or abilities from his success but his values. Or we can change the way we perceive success altogether. The idea of success must be seen in the values of person and how he reacts or treats the people around him. The way a person lives his life and performs his daily chores must be the central idea in judging whether he is successful or not. If not others every individual should at least develop values and measure his/her success against those ideals.

The world has become increasingly materialistic and success has just become synonym to magnitude of wealth, number of cars, size of the house and position in an organization. Until this changes as the definition of success, values will serve as the best way to live life and serve the nation, its people and make world a better place to live.