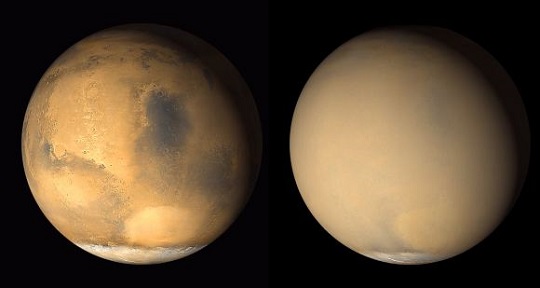 Among Elon Musk’s many plans for the future, one of the more ambitious has been the creation of a constellation of satellites that will offer broadband internet access to the entire world. Known as “Starlink”, the company’s long-term plan is to deploy over 12,000 internet satellites to Low Earth Orbit (LEO) by the mid-2020s. As it turns out, the global dust storms that envelop Mars, and in particular the most recent one that felled the Opportunity rover, may offer an explanation. Dust storms on Mars are common. They tend to be seasonal, taking place during the spring and summer in the southern hemisphere. They last a couple days and cover areas as large as the US. But then there are the planet-encircling, or global, dust storms. The global dust storms are more unpredictable than their smaller, seasonal counterparts. They appear every few years and can cover the entire planet. And they can stick around for months on end. During the last one, which lasted from June 2018 to September 2018, six orbiting spacecraft and two surface rovers observed the storm, though unfortunately Opportunity didn’t survive it.