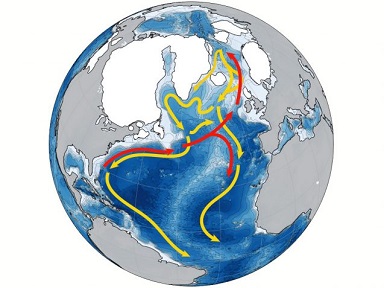 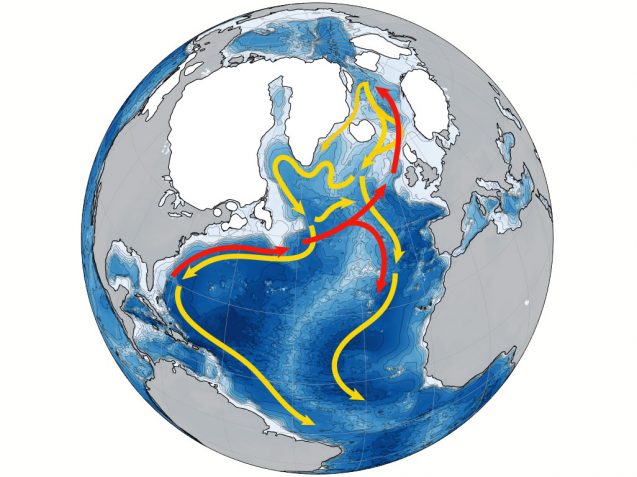 A million years ago, a longtime pattern of alternating glaciations and warm periods dramatically changed, when ice ages suddenly became longer and more intense. Scientists have long suspected that this was connected to the slowdown of a key Atlantic Ocean current system that today once again is slowing. A new study of sediments from the Atlantic bottom directly links this slowdown with a massive buildup of carbon dragged from the air into the abyss. With the system running at full speed, this carbon would have percolated back into the air fairly quickly, but during this period it just stagnated in the depths. This suggests that the carbon drawdown cooled the planet—the opposite of the greenhouse effect we are seeing now, as humans pump carbon into the atmosphere. But if the current keeps slowing now, we should not expect it to help us out by storing our emissions; possibly to the contrary. The study, led by researchers at Columbia University’s Lamont-Doherty Earth Observatory, appears this week in the journal Nature Geoscience.

The scientists targeted a system of currents called the Atlantic meridional overturning circulation, or AMOC. Flowing northward near the surface, it transports warm, salty water from near the equator into the latitudes near Greenland and northern Europe. Here, it hits colder water from the Arctic, becomes denser and sinks into the abyss, taking with it large amounts of carbon absorbed from the atmosphere. The deep water then circles back south, where much of it re-merges in the Southern Ocean, to release carbon back to the air. The journey takes place over decades to centuries..