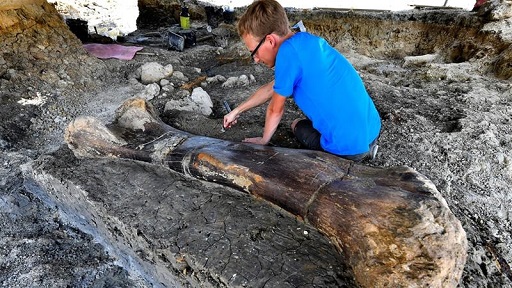 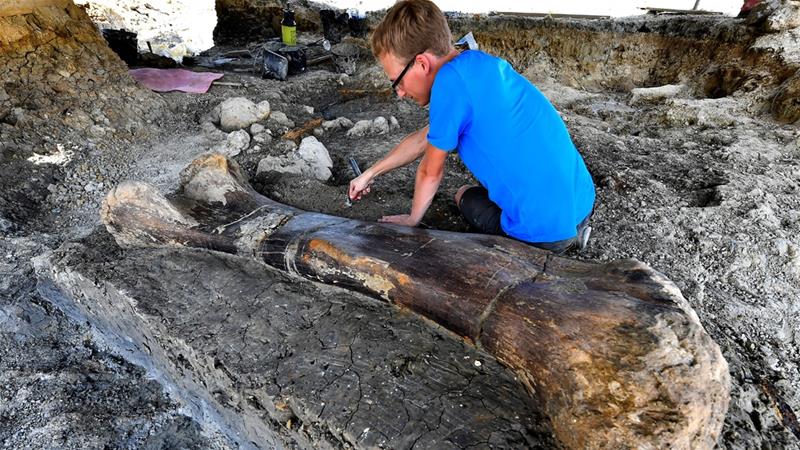 Scientists are hailing the discovery of the thigh bone of a giant dinosaur, unearthed this week in France, as a “major discovery”. The two-metre-long femur was found by French palaeontologists at an excavation site in the southwest of the country where remains of some of the largest animals that ever lived on land have been dug up in recent years. The bone was found in a thick layer of clay earlier this week. The bone at the Angeac-Charente site is thought to have belonged to a sauropod, a plant-eating dinosaur with a long neck and tail, which was widespread in the late Jurassic era – more than 140 million years ago.

A large pelvic bone was also found nearby. “This is a major discovery,” Ronan Allain, a palaeontologist at the National Natural History Museum of Paris, told Reuters News Agency, “I was amazed by the state of preservation of that femur. “These are animals that probably weighed 40 to 50 tonnes.” Allain told France’s Le Parisien newspaper that, as well as the bone’s size, its state of preservation was also impressive. “We can see the insertions of muscles and tendons and scars. This is rare for big pieces which tend to collapse in on themselves and fragment.” Scientists at the site near the city of Cognac have found more than 7,500 fossils of more than 40 different species since 2010, according to Allain, making it one of the largest such finds in Europe.