Jupiter’s Great Red Spot May Not Be Dying Out Just Yet! 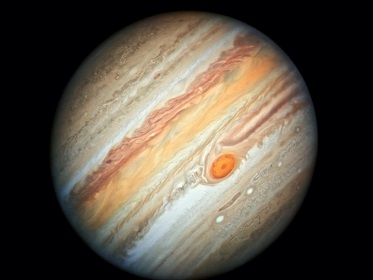 Sue Smrekar really wants to go back to Venus. In her office at NASA’s Jet Propulsion Laboratory in Pasadena,

The Great Red Spot may have been originally discovered in 1664 by English scientist Robert Hooke, reports Kenneth Chang at the New York Times. Astronomers continued to see the oval until 1713, though it wasn’t recorded again for a century. It’s not clear if the spot disappeared and reformed, if a different spot formed, or if scientists simply couldn’t find it for a time. In any case, the current rusty-red storm has persisted for at least 189 years and has been closely monitored ever since.

Jacob Stern at the Atlantic reports that since the late 1800s, astronomers have noticed the spot, an anticyclone storm about three times wider than Earth locked into place by opposing jet streams, has been shrinking. In 2012, skygazers noticed the shrinkage had accelerated. Earlier this year, amateur astronomers found that the normally oval-shaped spot looked a little deformed. Later, some observed that bits seemed to be “flaking” off of it. In May, some space enthusiasts began to suspect that the red spot could be unraveling. The spot eventually stabilized, but the incident has raised questions about the future of the iconic storm on Jupiter.